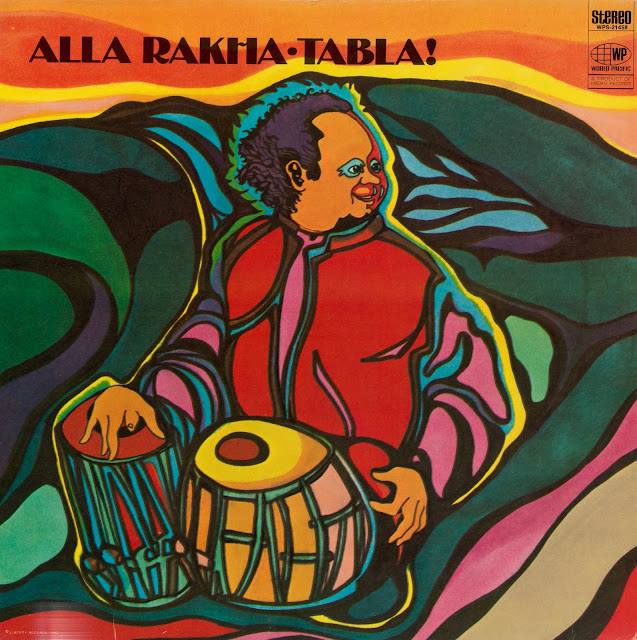 The article about Alla Rakha from the Enclycopedia Brittainica, written by Virginia Gorlinski, is as follows:


"Alla Rakha, Alla also spelled Allah, originally Allarakha Qureshi Khansaheb, also known as A.R. Qureshi, byname Abbaji, (born April 29, 1919, Phagwal, Jammu, India—died February 3, 2000, Mumbai), Indian tabla player, widely acknowledged in his day as one of the finest in India. As a regular accompanist of Indian sitar virtuoso Ravi Shankar in the 1960s and ’70s, he was largely responsible for developing interest in the tabla among non-Indian audiences. He traced his lineage to the Punjab gharana (community of musicians sharing a distinctive musical style).


"Despite opposition from his family, Alla Rakha left home at age 12 to learn tabla under the great master (ustad) Mian Qadir Baksh. He also trained under Ashik Ali Khan, a vocalist admired especially for his mastery of the khayal Hindustani song repertoire. Alla Rakha joined All India Radio at Lahore as a staff artist in 1936, and in 1938 he was transferred to Bombay (now Mumbai) as a senior percussionist. Initially he had a difficult time proving himself, but soon his command of the tabla—displayed through outstanding technique and tone production—impressed both the connoisseur and the layperson alike. In 1943 Alla Rakha left All India Radio to work in film music. Using his family name, A.R. Qureshi, he composed sound tracks and served as musical director for numerous movies.


"By 1958 he had become disenchanted with the film industry and left that arena to focus on classical music. Also that year he toured internationally with Shankar, and the two artists subsequently developed a musical partnership that lasted nearly three decades. Especially as Shankar’s counterpart, Alla Rakha played a key role in raising worldwide awareness of the tabla and of Indian classical music as a whole. In addition to Shankar, Alla Rakha teamed with other virtuosic musicians, such as sarod master Ali Akbar Khan, to perform playfully competitive duets known as jugalbandis.


"Aside from his work with Indian classical musicians, Alla Rakha notably collaborated with American jazz drummer Buddy Rich to create the album Rich à la Rakha (1968), a pioneering experiment in the type of cross-cultural musical fusion that became increasingly popular later in the 20th century."

A good explanation of what FLAC files are and why you should be listening to them if you can.

Please note — my scanner has been not working well with my new laptop. I can only scan once each time before I have to quit and restart. Each time I scan a cover I need to do it 4 times and then merge the photos using Photoshop (Windows uses can use a different application). The back cover and label scans will be forthcoming soon! Thank you for your patience!
Posted by Richard at 1:17 AM 5 comments: