Here we have an excellent LP by Ustad Ali Akbar Khan with Pandit Swapan Chowdury on tabla.

At this point Swapanji had taken over for Zakir Hussain as the main tabla instructor at the Ali Akbar College of Music in San Rafael, CA, after Zakirji's hectic performance schedule no longer allowed him to fulfill his teaching commitments.

There is a school of thought which posits that Khansahib should have stayed in Calcutta and helped his school there to flourish, rather than spend more and more time in California, where (admittedly) there were more dollars and more sports cars. You can find plenty of articles on the internet describing in minute detail Khansahib's supposed decline in terms of his creativity and playing and bemoaning the "good old days" of the 1940s and 1950s.

It's always easier to be a superhero musician when almost no one is recording your performances. People can tell anecdotes about brilliant private house concerts which put to shame anything recently released, without there being any evidence to contradict them. When you start releasing 4 or 5 albums a year, you are exposed to a lot more scrutiny. Certainly, there is a somewhat commercial aspect to albums entitled "Music for Meditation" and a surprising stopwatch quality to others entitled "The 40 Minute Alap" and "The 80 Minute Raga."

What cannot be denied, however, is that Khansahib was a primary musical force in 20th century Hindustani classical music. He helped popularize it in the West and taught many individuals who themselves would go on to become respected teachers. Besides, when one considers the fact that Nikhil Banerjee considered himself a disciple of Ali Akbar Khan, that is all I really need to know in order to greatly respect him.

This LP, recorded for EMI at an undisclosed location (probably India, but there were recording studios in California at the time, too) was released in 1979. It has an iconic cover with a brilliant repeating design and was pressed at the Gramophone Company's plant in Dum Dum, India. 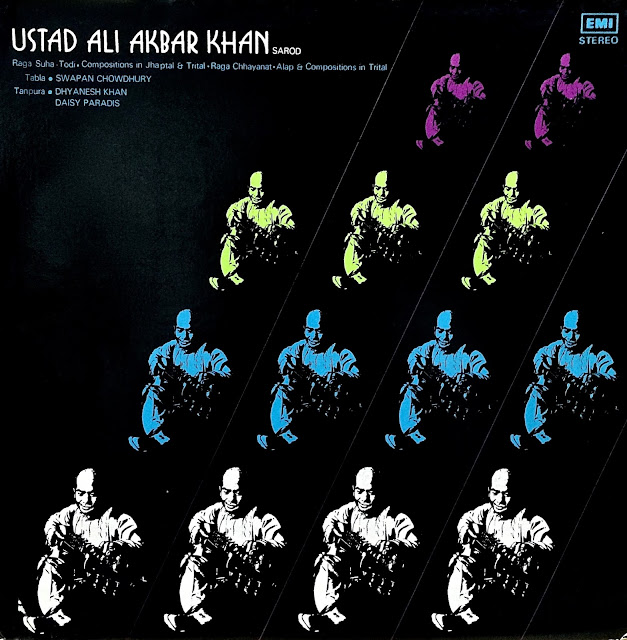 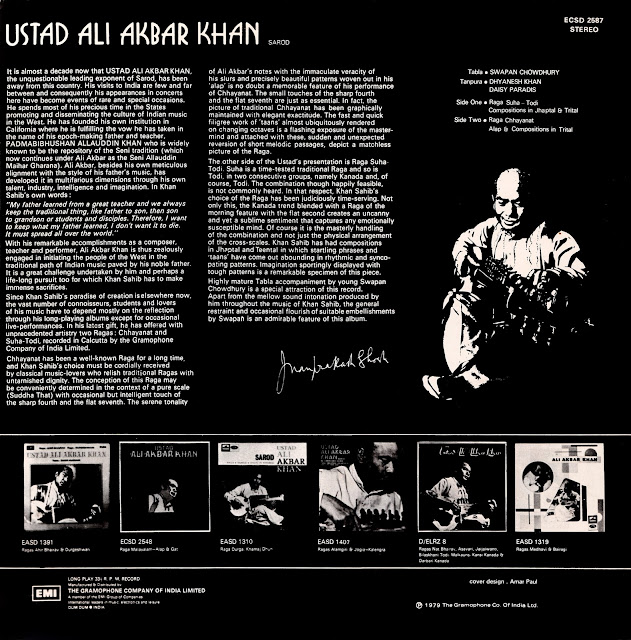 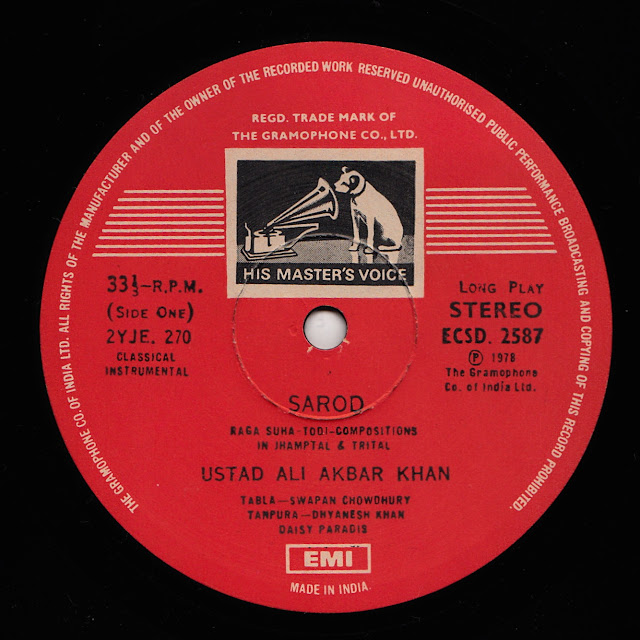 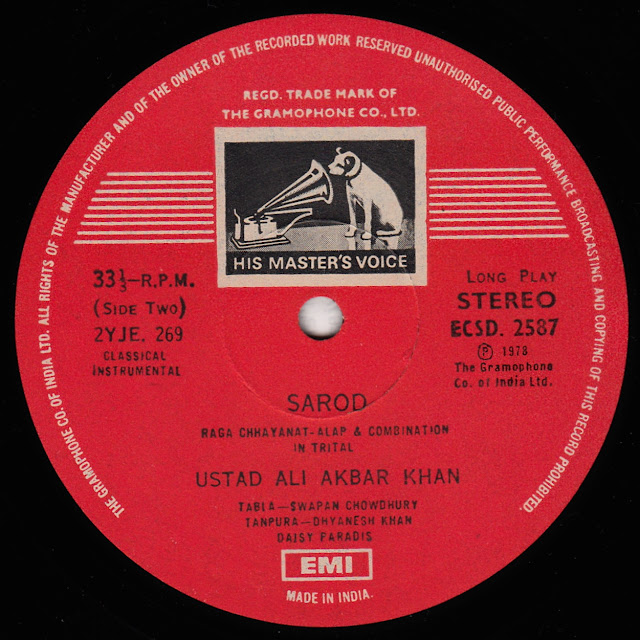 Equipment used in transfer:
Preparation: Ultrasonic cleaning for 10 minutes in water, followed by a  quick vacuum drying with a VPI 16.5 cleaning machine
Turntable:  Audio-technica AT-LP-1240
Cartridge: Shure M97x
Pre-amplification: Vintage refurbished Pioneer SX-780.Recorder: Edirol R-09HR at 24bit/44.1kHz resolution
Software: Audacity to normalize and carefully remove one or two clicks per side using the "repair" tool. No change in EQ was made. Conversion to 16/44.1 took place in Audacity. xAct was used to convert to FLAC and mp3. So-called "noise removal" was avoided in order to best preserve the dynamic nuances and tone quality of the original sound.

here is a live video of Khansahib, Swapanji and Mary Khan on tanpura

Here is another, different transfer from a blog post published in 2011