My final cassette post this weekend is one of a series of cassette tapes which were issued in the 1980s by Alam Madina Music Productions -- basically an in-house label of the Ali Akbar College of Music. This series was entitled "Live Concert Series," the tapes of which were chosen by the Maestro himself from his personal collection. I own five volumes of this series, although with one volume there are two cassettes and my retail source at the time only had one of them. There is a different series of live cassettes produced by the AACM ("Ali Akbar Khan: Live in Concert") which may have only been available to students or in person at the school. I have one volume (vol  XII -- but only in someone else's mp3 transfer), which is available on the internet if one looks hard enough.

In case you are wondering, "Alam" is the name of Ali Akbar Kahn's youngest son, a gifted and underrated sarod player who has only a few CDs to his name. Alam seems reluctant to go on long tours which would help his reputation, but does make short trips to play a single date or two. Alam is quite friendly and humble in person, with a relatively wide range of interests. He concentrates very hard on his instrument while playing in public, to the point where he makes little or no eye contact with the audience. That is fine with me, but I think it is atypical among ICM performers. I own five live recordings of Alam, recorded either by me or a relative of mine, all of which suffer from various setbacks -- so I don't think they will be shared here.

"Madina" is Alam's sister. The family-centered nature of the label is further shown by the names of Ashish Khan (AAK's oldest son) and Mary Johnson Kahn (Alam and Madina's mother) on the outer part of the J-card.

My understanding, from casual conversations with people who might have gotten certain details incorrect, that by January 1981 the great Swapan Choudhury had moved from Calcutta and was living in San Rafael and teaching at AACM. It's not clear why Swapan ji did not accompany Khansahib on this tour; I imagine it was because he had just moved to the US and wanted to devote his time to building the tabla program at AACM. Possibly there were personal issues which made performing in India at the time difficult.

The two pieces on this cassette almost sound like two different concerts (which could be the case). An alternative explanation for the differences in aural character between the two is that adjustments at the mixing desk were made during the show, which can often occur.

The first piece is an alap and jod section of Raga Miyan ki Malhar. This has a slightly dull upper end and some minimal distortion at the dynamic peaks. I would have though it was an issue with azimuth adjustment, but the fact is that the second piece sounds more full and with a crisp upper end in comparison. Because of the way cassettes are made, a cut had to be made in the longer piece so that the sides were about equal in timing. The first section of Raga Desh Malhar is on the same side of the tape as the entire alap and jod of Raga Miyan Ki Malhar, but sounds exactly like the rest of the raga on the other side of the tape. So it was not a case of one side of the tape being played with incorrect azimuth. I stitched together the longer piece in a way that is noticeable but not jarring.

Overall, it is an extremely enjoyable live performance from Ali Akbar Khan and tabla maestro Shankar Ghosh, who unfortunately died in late January of this year. 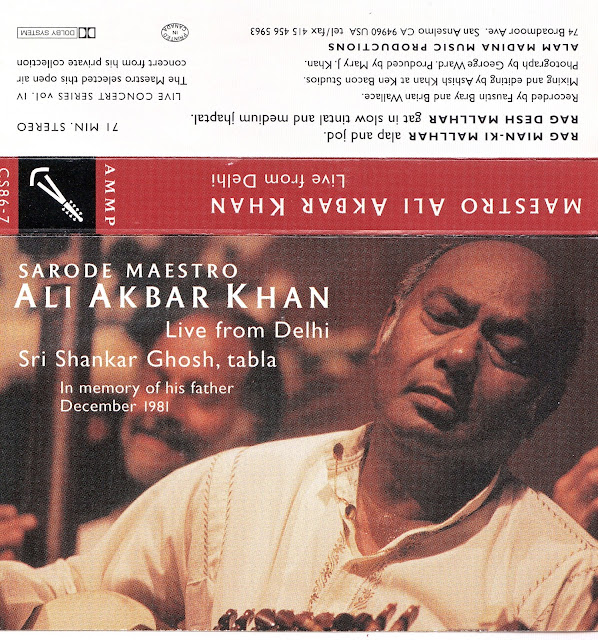