This concert was billed with Zakir Hussain first. I think he is the only tabla performer who can get top billing in a concert tour of the United States. Whether or not this fame in the United States (specifically) is based on classical performances or from those collaborations he has done with the likes of the Grateful Dead, Planet Drum, Bela Fleck, Edgar Meyer, and so forth, I will leave to your judgement. Either way, we are lucky to have Zakir ji living in the San Francisco Bay area and being able to tour several times a year in the US.

A few days before this concert, Zakir ji and Rahul ji performed at an East Coast music conference. A friend of mine, a professional tabla performer who also was performing at that conference, was profoundly moved by Zakir ji's performance. He asked me to transfer his personal audience recording of that concert (not this one) to a CD so that he could study it at length and in detail. High praise indeed from that discerning and professional listener.

Rahul Sharma is the son of legendary santoor maestro Shiv Kumar Sharma. I would say that my impression so far of his playing is that he plays beautifully. I am sure that as he progresses he will continue the legacy of his father.

The first set is really the one of interest here -- a quite long performance of Raga Janasommohini with gats in matta taal and teentaal.  I believe that Janasommohini was originally a carnatic raga, but it seems to have been performed by quite a few Hindustani performers including Amir Khan, Ravi Shankar and santoor maestro Tarun Bhattacharya among others.

The second set? I think many in the audience enjoyed it. A close non-musician associate of mine, upon hearing this recording, remarked that it sounded like something one would hear in an elevator on the way to the dentist's office. Nothing was announced from the stage except that Rahul said they would be performing an "experiment" -- I think these are mostly likely light semi-classical pieces and folk songs. It is not objectionable and the 25 minutes pass by quickly.

The sound quality is truly excellent, in my opinion only barely distinguishable from an official release of live material. If you have been holding off in downloading any of the live material I have been posting, take a chance on this and see what you hear. Thanks! 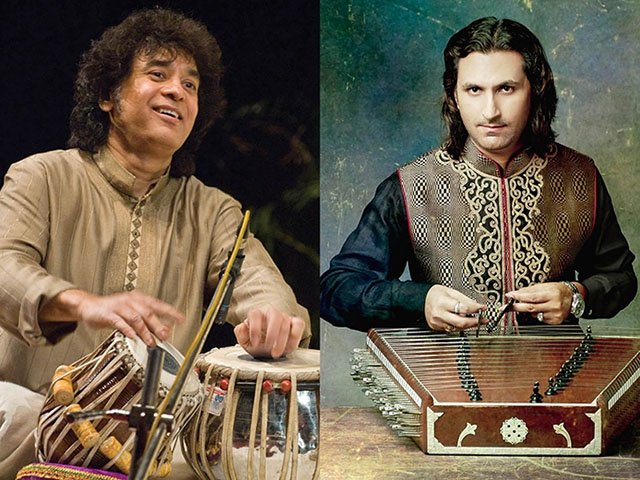 This recording was obtained on "Dimeadozen," a torrent site devoted to live music recordings.  It was shared there in 16bit 44.1kHz format. I have shared the unchanged FLAC files and also produced an mp3 version using xAct. The original information attached to the recording is as follows:

Recorded, edited, and mastered by Relefunt and originally seeded to Dimeadozen in November 2017