Surdas was a 15th century poet, reportedly blind, who is renowned for his many poems about the life of Lord Krishna. The Murty Classical Library of India has published a lovely collection of some of the earliest known manuscripts of Surdas' poetry and the book is well worth searching out.

MS Subbulakshmi was one of the most prolific and popular singers of bhajans, or Hindi devotional songs. This delightful LP, rescued from my local record shop which just recently placed on their shelves a small but choice selection of Indian vinyl, was recorded in 1986 by EMI and features vocal support from Radha Viswanathan. (Thank you Ken for your wonderful record store!)

The poems were set to music by P.S. Srinivasa Rao.

At times the close harmonies are reminiscent of heavily applied reverb, but I think the heartfelt singing of MSS shines through.

This is a remaster of an old post from the halcyon days of early 2015.
I boosted some midrange frequencies and was able to remove most of the remaining groove noise without affecting the music in any way. 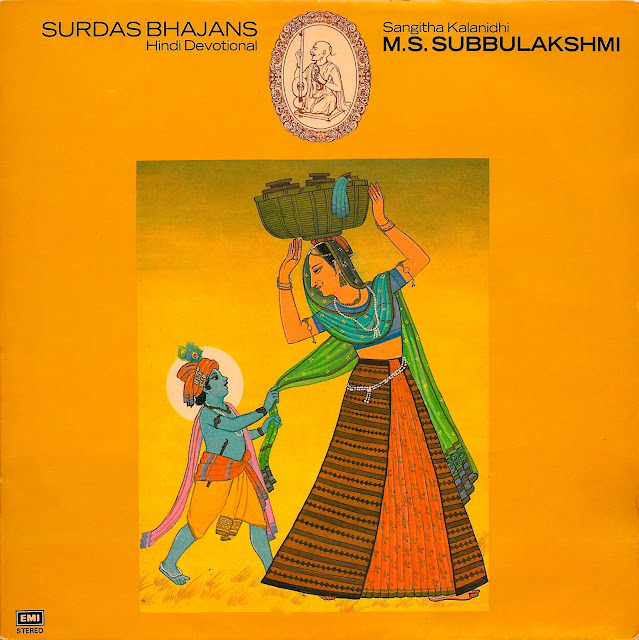 The songs are as follows:

And here is another video of a performance of a bhajan by MSS.

Turntable:  Audio-technica AT-LP-1240
Cartridge: Shure M97x
Pre-amplification: vintage restored Pioneer SX-780
Recorder: Edirol R-09HR
Software: Audacity to normalize and carefully remove one or two clicks per side. Only very minimal change in EQ was made - a few dB increase in the 2000-3000 range (using parametric EQ). Conversion to 16/44.1 took place in Audacity. xAct was used to convert to FLAC and mp3.